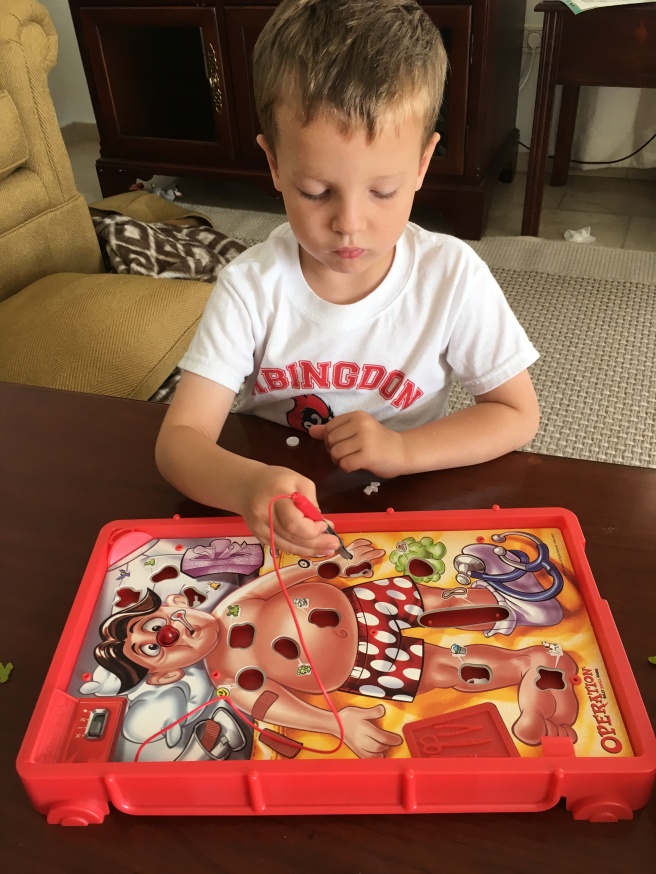 A week after we moved here, my downstairs neighbor showed up with an armload of board games. My kids were ecstatic because apparently I’m allergic to board games so we have none. Today when we cracked open Operation for some good old fashioned fun, my four-and-a-very-important-to-include-half-year-old son had an almost crippling meltdown, and I had a revelation.

Let me back up. Two weeks ago, we moved east across the ocean to a small but strong democracy in the Middle East. (Like the last time we moved, I’m not planning to put the name of the country in writing, but you can figure it out pretty easily. My reason for this is that I don’t want to draw attention from bots, trolls or google searchers looking to harass or gather info on people who live here. I might anyway, but I’ll do what I can to prevent it.)

Though moving every few years is part of the job we (my husband really, but we are one) signed up for, it comes with so many mixed emotions. People constantly asked, “Are you excited about moving to I—?” I would stutter something back about feeling a lot of things, with excited being the last (but not least) of them.

In the leaving part of moving, there are the feelings of apprehension, stress, loss and grief. There is the physical and mental work of sorting, purging, packing, and planning/attending goodbye get togethers that is rewarded with feelings of satisfaction in an effective process (or the inverse), appreciation for all the help and value from loved ones who soak up their time with you.

In the arriving part of moving, you can be met with feelings of awe and wonder at the newness of everything, curiosity and frustration as you try to figure out how things work, loneliness and isolation as you work to make new friends and find your place. There’s exhaustion as your body works through jet lag and adrenaline surges to cope with stress. Oh, and there’s also excitement.

With all this talk of emotions, I should mention that I usually score pretty high on the T side of the Feeler-Thinker spectrum. That’s not to say I don’t have feelings or emotions, but I’m most comfortable operating without their overwhelming influence.

So, when these huge transitions come and there are as many emotions to sort through as there are boxes of everythingweown to put away, I have a tendency to get overloaded with it all and just want to shut down. When Judson was ready to throw the Operation game out the window, I knew just how he felt.

His fine motor skill of extracting a small piece of plastic from an odd shaped space with a pair of tweezers had yet to be developed. This was a brand new task for him. The game’s buzzer of failure continually reinforced his feelings of inadequacy and limited his capacity for learning. He was quickly becoming Not-A-Fan of the game.

And then I realized I could kill the buzzer.

He could learn the grip and motions necessary to play the game and if the tweezers touched the side, he wouldn’t be frozen by the fear of failure. After a few rounds like that, we tried it with the buzzer on and he was much more confident in his new ability and still didn’t mind when he messed up.

Since we don’t get practice rounds in most of life, I want so badly to get things right the first time I do something that anything less sounds a giant buzzer in my head. Moving involves a lot of doing things (again) for the first time and a lot of not getting them right. It involves handling a lot of different shaped emotions for myself and my family and learning how to navigate them through all the different spaces. And of course, there’s plenty of touching the sides with the tweezers. Cue the buzzer.

Now, I’m not advocating a life free from the consequences of bad decisions. I’m just realizing more about how I learn by watching my kids. If I can tell them, “You’re doing fine, just keep trying. Don’t get too upset about it, try to have fun. Try it a different way if that’s not working,” then I can definitely say them to myself.

Hours after the near disastrous morning session, my kids ran in from the park asking if they could play Operation, Judson insisting, “It’s my favorite game!” Now that’s the sound I want to hear, not that silly buzzer!

4 thoughts on “Kill the Buzzer”